Power BI and The Open Bar

Back in July, the mighty Adam Saxton (Blog|Twitter) blogged about there being a limit of 10 reports per Dataset in Power BI. On your attempt to create your 11th report, you would get an error. Adam did point out, though, that you could have many pages within a report. That helped. That post from Adam mentioned above is no longer there because… <pause for effect> that limit has been raised to 200! Hazzah! 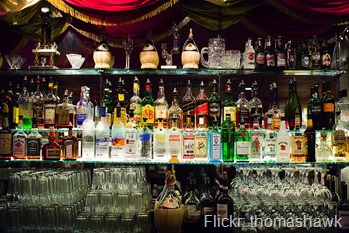 I saw some grumbling over the 10-report limit. Granted, 200 is still a limit, but I feel there should be a limit. Power BI, after all, is currently an offering with only two subscription levels: FREE and $10/month. SOME manner of limit only makes sense. And 200 is definitely more than 10. It’s true. I looked it up on the Internet.

When the initial limit of 10 was announced, I asked for info from Microsoft on the maximum number of pages a Report could handle so I could write up a post and help spread the word and make sure people knew they could still do quite a bit even within that limit. When I checked back on the answer recently, I was told (per my Non-Disclosure Agreement with Microsoft) of the impending announcement and the new limit. Grand. That post would not be necessary. Hazzah, again!

This got me thinking, though. I felt the limit of 10 was pretty low and limiting, but I liked the fact that there was a limit. What???? You WANT to be limited???? Yeah. To an extent, I think it is a good thing. Here is the way I see it.

Events I have been to often have bars where people can get liquid refreshments. I, personally, seldom drink alcohol. But the vast majority of my friends do. To them, whether there is an Open Bar or a Cash Bar makes a difference. With an Open Bar, all drinks are paid for by the event rather than drinkers having to pay for them as they get them. With a Cash Bar, the drinkers have to pay as they go. I have often heard it said that an Open Bar leads to a lot more waste as people put their drinks down and forget them and just go get another cuz, hey, it didn’t cost anything. With a Cash Bar, people tend to pay more attention to their drink since they have made an investment of their own. I have not dug around in the data on this, but it seems reasonable, so let’s go with it for now.

When it comes reporting, a lot of organizations I have seen view their reporting environment, like SQL Server Reporting Services, for example, as an Open Bar. There is not a hard limit on reports. So, when in doubt, make a new report. Hey, it doesn’t cost anything, right? Ug. It actually does. Between the dev time for that report, and the testing (sigh, PLEASE test your reports, k?), and then resources involved in maintaining that report and perhaps running it via a schedule and dealing with issues, etc, there is very definitely a cost. When there is a limit on a resource, organizations tend (not always) to think more strategically about that resource. So, if you have a limit on the number of Reports you can create, you will think more about when to create a NEW report and when use an existing one that already has 99% of what the users are looking for. I have worked for several clients in a serious report sprawl situation. They may have dozens of copies of the SAME REPORT with the only difference being a hard coded value referring to a particular customer. Someone needs to learn about Parameters. But, I digress.

Even with this limit being raised to 200 in Power BI, my hope is that people take the few extra moments NOW to consider whether they REALLY need that new report, or if they can accomplish the same thing with what is already there. This hope applies to Enterprise reporting solutions (like SSRS) just as much, if not more than with Power BI.

Still, I have to hand it to Microsoft, here. It is a great example of customer feedback driving a change in a meaningful way. If you have feedback to offer around Power BI, please head over to http://community.powerbi.com/ and make your voice heard. Whether it be an idea for a feature or even just a question, the Power BI Community site is a great place to go.