Microsoft has been publishing and maintaining Release Notes documents to share our plans for Dynamics 365 and the Power Platform (Power BI, Power Apps, Microsoft Flow, and the Common Data Service for Apps). You can find them here: aka.ms/businessappsreleasenotes. This set of documentation is grouped to align with the semester system upon which development of the relevant offerings is based. The link above will automatically take you to the most recent edition of the release notes, which, at this time, is the April ‘19 Release Notes (covering the semester from April 2019 thru September 2019).

On the Power BI Customer Advisory Team (PBICAT), we see a lot of questions about the roadmap for Power BI and other related technologies. Often, the answers can be found in the Release Notes. While the layout of the Release Notes is somewhat intuitive, it can still be daunting for folks who are not used to them to find the information they need.

And so it came to pass that I decided to write a blog post on how I navigate the Release Notes, which I use daily in my role on PBICAT. I will be focusing on Power BI for this post, but the pattern is consistent across the other covered technologies. Behold.

What are Release Notes?

The Release Notes provide information on features that are planned for release during the relevant semester. The key word here is PLANNED. As the overview on the landing page indicates, “These release notes describe functionality that may not have been released yet. Delivery timelines and projected functionality may change or may not ship (see Microsoft policy).”

This is important. A feature appearing in the Release Notes with a particular release target date (sometimes just year and month) is not a 100% commitment. Sometimes, plans need to be adjusted.

The Release Notes Are a Living Document

The Change History page will list modifications to the Release Notes that have occurred since the original publishing of the document for that semester. The right navigation pane, shown in Figure 2, lists the technology areas for which there have been changes, including a link to that list of changes.

For Power BI, we will choose the Business Intelligence entry, shown by the arrow in Figure 2. This will list out the changes to the Release Notes with respect to Power BI Desktop, Power BI Service, etc, as shown in Figure 3. 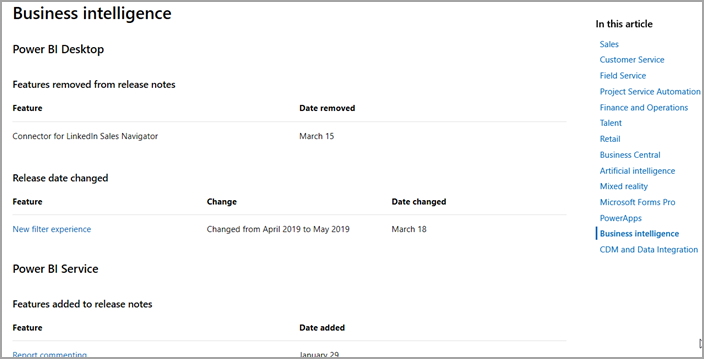 This allows you to see exactly what change was made and the date the Release Notes were modified to reflect that change.

Since changes to this document can happen at any time, I personally always use the online version of the Release Notes rather than downloading the PDF. The PDF is not maintained with the same frequency of the online version. For example, in Figure 3 above, you can see changes for Power BI Desktop occurring on March 15 and March 18. At the time of this writing, the PDF of the April ‘19 Release Notes was last updated on March 29th. If you need to use the PDF from time to time for offline viewing, etc, just make sure to check back to the online version on a regular basis to see any changes that have occurred.

In the left navigation pane, which is visible regardless of where you are in the online Release Notes, there is an entry near the bottom for Business Intelligence, as seen in Figure 4. You will also notice that you can filter this list by title.

Clicking on Business Intelligence expands that section to reveal subsections for the different area of Power BI, as seen in Figure 5. 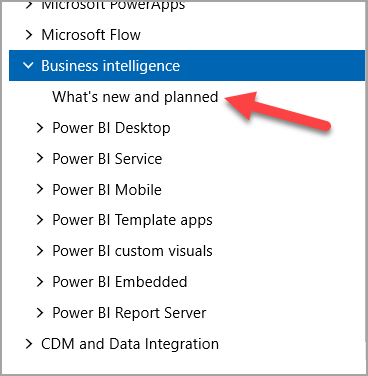 Typically, the first place I go is the What’s new and planned page, show with the arrow in Figure 5 above.

This wonderful page has the full listing of planned features, organized by the area of Power BI (corresponding to the sections in Figure 5). For each feature, you can find the type of release (General Availability, Public Preview) along with the target Date for that release, as you can see in Figure 6.

More often than not, the Date will just be a Month and Year. As the description at the top of this page indicates, that means that the release is planned to occur at some point within that month.

Also, just like on the Change History page, there is a right navigation pane that allows you to skip to a particular area of the product, as shown in the circle in Figure 6.

Note: Remember that this is a living document. Thus, the dates shown in Figure 6 and elsewhere in this post are current as of the time of this writing, but could change at any time. So, make sure you use the real Release Notes for these dates and don’t rely on this post for that.

From here, you can click on a Feature to get more details around what is planned. For example, if we click on “New Filter Experience,” shown by the arrow in Figure 6, we go to the detail page for that feature, as shown in Figure 7. 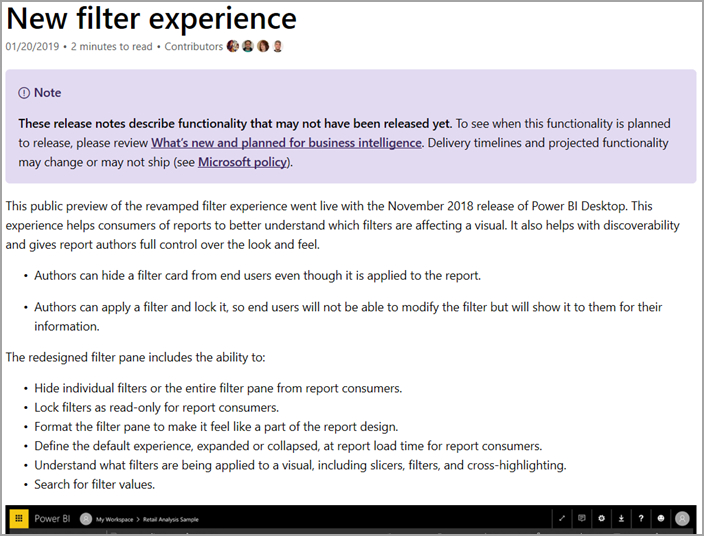 The amount of detail in each Feature page will vary based on what the Feature owner has chosen/is able to share.

I also want to point out that each detail page has a link to take you directly to that page without having to navigate to it again from scratch. This is shown in Figure 8.

I think this is important because it allows you to easily share the details of a feature you are excited about with your colleagues, your boss, your mom, or whoever else.

Also note that when navigating to the detail page for a feature, the left navigation pane expands to show you where that sits in the overall structure, as shown in Figure 9. You can, if you like, navigate to the detail pages this way instead of going through the What’s new and planned page. The path you take can vary based on what you need at the time.

What About Power Query and the Gateway and Connectors?

Connectors, Power Query, the On-Premises Data Gateway, etc are owned by the Data Integration team as opposed to the Power BI team. This is because they are not particular to Power BI, but rather to the Power Platform, etc, as a whole. Thus, the CDM and Data Integration section is where you will find the Release Notes entries for these and other features, as shown in Figure 10.

I hope this helps make navigating the Release Notes a bit easier. I know it is a big place with a lot of moving parts, so it can be a lot to take in when you are not used to it. But, once you have a better understanding of how things work, it becomes an easy and super valuable source for roadmap information.